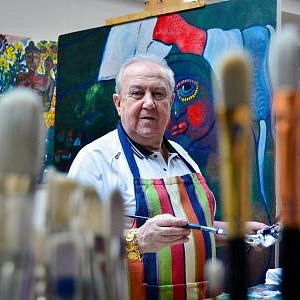 The Heydar Aliev Center in partnership with the Russian Academy of Arts and the Moscow Museum of Modern Art presents the exhibition “Possible Dimensions” which continues a series of exhibitions of the world renowned Russian-Georgian artist Zurab Tsereteli in honor of his 85th anniversary.

The exposition brings together more than 30 works from Moscow, Tbilisi and London featuring paintings, sculptures and enamels that cover the artist’s long career.

Zurab Tsereteli is famous for his monumental sculptures and public monuments. He works with bronze, stone, glass, wood and mosaics. In the late 1960s Tsereteli started to receive a widespread recognition. His monuments can be seen in London, Moscow, New York, Paris, Rome, Tokyo and other cities of the world.

According to the artist, after meeting Picasso and Chagall in 1946 in France he completely revised his understanding of the creative process. The way the masters easily moved from painting and graphic to ceramics and sculpture inspired him for creation of a new series of works. The influence of Picasso is evident in “Inesse” painted soon after his visiting Picasso’s studio in Paris. Tsereteli’s well-known sculpture “My Favorite Artists” (2009) presents Picasso, Modigliani, Chagall and Van Gogh, the year before he had created sculptural images of Pirosmani and Henty Rousseau. Tsereteli’s works were also influenced by Russian artists, in particular,  the abstract expressionism of Kandinsky, suprematism of Malevich.

Solo exhibitions dedicated to the artist’s jubilee will be also held in China and Lichtenstein in 2019.