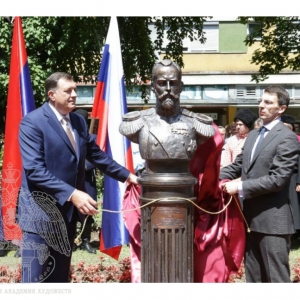 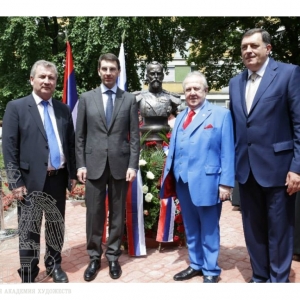 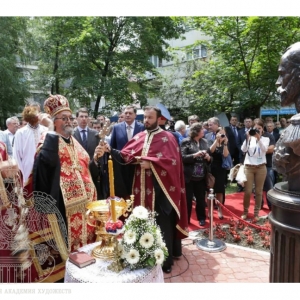 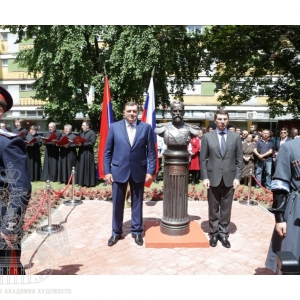 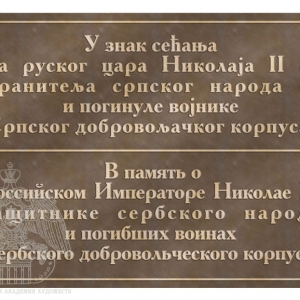 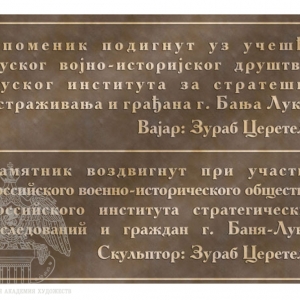 On June 21, 2014 in the Republika Srpska (Bosnia and Herzegovina) in the city of Banja Luka under the auspices of the Russian Minister of Culture Vladimir Medinsky there was an unveiling ceremony for the monument to the Russian Emperor Nicholas II  presented as a gift to the people of the Republika Srpska. The monument has been created by Zurab Tsereteli, the world renowned artist and sculptor, People’s Artist of the USSR and RF, President of the Russian Academy of Arts.

The inscription on the monument’s base runs: “In Commemoration of the Russian Emperor Nicholas II,  Defender of the Serbian People and Lost Soldiers of the Serbian Volunteer Corps”. The bronze bust has been erected under the support of the Russian Military Historical Society, the Russian Institute for Strategic Researches and citizens of Banja Luka.

In the Orthodox Cathedral of the city of Banja Luka the Serbian and Russian clergy served a liturgy accompanied by the choir of the Ipatiev Monastery of the city of Kostroma. On the same day the University in Banja Luka hosted a panel discussion on the topic: “The 100th Anniversary of the First World War and  Participation of Serbian Volunteers as a Part of the Russian Imperial Army” with involvement of Russian and Serbian researchers including Dr. Petr Multatuli – researcher of the life and reign of the Russian Emperor Nicholas II.