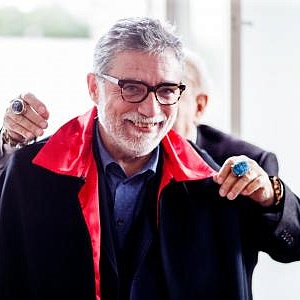 On July 8, 2019 the Spanish artist and sculptor Jaume Plensa was presented with the regalia of the Honorary Member of the Russian Academy of Arts. The award ceremony took place at the opening of the master’s solo exhibition at the Moscow Museum of Modern Art (25 Petrovka street).

The opening of Jaume Plensa’s first exhibition in Russia  (09.07.2019-22.09.2019) presenting sculptures and installations created by the artist for the last 30 years was attended by the Ambassador of Spain to Russia Fernando Valderrama, President of the Russian Academy of Arts Zurab Tsereteli, Executive Director of the Moscow Museum of Modern Art Vasily Tsereteli, the exhibition’s curator –  Director of Barcelona  Museum of Contemporary Art (MACBA) Ferran Barenblit, President of the MACBA Foundation Ainoa Grandes Massa, figures of culture and art.

Jaume Plensa was born in Barcelona in 1955, studied at the Llotja School of Art and Design and at the Sant Jordi School of Fine Arts. Since 1980s, the year of his first exhibition in Barcelona, he has lived and worked in Berlin, Brussels, England, France and the United States. Currently Plensa resides and works in Barcelona. He is a holder of the Medaille  des Chevaliers des Arts et Letters by the French Minister of Culture (1993) , the National Visual Arts Prize of the Generalitat de Catalunya (1997), the Velazquez Prize for Visual Arts of the Spanish Ministry of Education and Culture (2013) and other awards. In 2015 he received the Global Fine Art Award in Miami for “Together”, an installation in the Basilica di San Giorgio Maggiore as part of the Venice Biennale (2015).