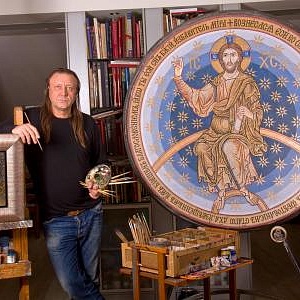 Through the Edict of the President of Serbia the Academician of the Russian Academy of Arts Nickolai Mukhin was awarded the Serbian Order of Banner 1 Rank for his work at the mosaic interior decoration of the Cathedral of St. Sava in Belgrade, as well as for his contribution to the promotion of Russian-Serbian cultural relations. The award ceremony took place in Belgrade on November 11, 2020.

The telegram of congratulations to Nickolai Mukhin from the President and the Presidium of the Russian Academy of Arts, in particular, runs:

"You are a distinguished multi-sided artist, you have completed the work unprecedented in volume and complexity that is a great contribution not only to the Christian world, but also to world art".

Nickolai Mukhin graduated from V. Surikov Moscow Art Institute, among his major works: the central Altar composition in the Cathedral of Christ the Savior in Moscow " the Virgin", wall paintings in cathedrals in Yaroslavl, Serbia, Croatia, work at the mosaic interior decoration in St. Sava Cathedral in Belgrade, as well as sculptural works and works of easel painting. His works are in many museums in Russia including the State Tretyakov Gallery Art Galleries in Norilsk, Togliatti, Kursk, funds of the Culture Ministry of Russia, private collections in Russia and other countries. Nickolai Mukhin is a holder of numerous state, religious and Academy awards.

The Cathedral of St. Sava in Belgrade has been recreated as a monument symbolizing the rebirth and strengthening of the spiritual life of Serbian people and Orthodoxy. The work at the mosaic interior decoration of the Cathedral - one of the largest Orthodox churches in the world - has been executed by artists of the mosaic workshop of the Moscow International Foundation for Support to UNESCO under the supervision of the People's Artist of Russia Nickolai Mukhin since 2016.