MEMORIAL PLAQUE COMMEMORATING THE PRESIDENT OF A. PUSHKIN STATE MUSEUM OF FINE ARTS IRINA ANTONOVA (1922-2020) WAS UNVEILED IN MOSCOW 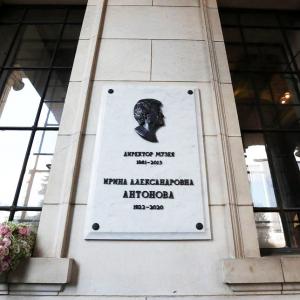 On March 20, 2021there was an unveiling ceremony for the memorial plaque commemorating the President of A. Pushkin State Museum of Fine Arts, Honorary Member of the Russian Academy of Arts Irina Antonova (1922-2020). The plaque authored by the People’s Artist of Russia, Academician of the Russian Academy of Arts Georgi Frangulyan was placed in the space of outer colonnade of the Museum building near the memorial plaques to its founder Ivan Tsvetaev, architect Roman Klein and main donator Yury Nechaev-Maltsov.

The ceremony was attended by the Deputy Chairman of the Russian Government Tatyana Golikova, Minister of Culture Olga Lyubimova, Director of A. Pushkin State Museum of Fine Arts Marina Loshak, figures of art and culture. “Today is a special day – the birthday of Irina Antonova, she would have been 99 years old, almost a century, she devoted the biggest part of her life to Pushkin Museum. In 1945 she came here as a young girl and gave 75 years to the Museum” – said Tatyana Golikova. According to her words, “today, A. Pushkin Museum is a pearl in the world museum space. We will do everything possible to commemorate her memory not only today by unveiling the memorial plaque, but also by our further actions to ensure, that the memory of Irina Antonova passes from generation to generation", - added Tatyana Golikova.

Besides the memorial plaque, from March 21, 2021 the Museum opens to the public "The Director's Office". It is also planned to set up an international center for advanced humanitarian studies - Antonova Center.