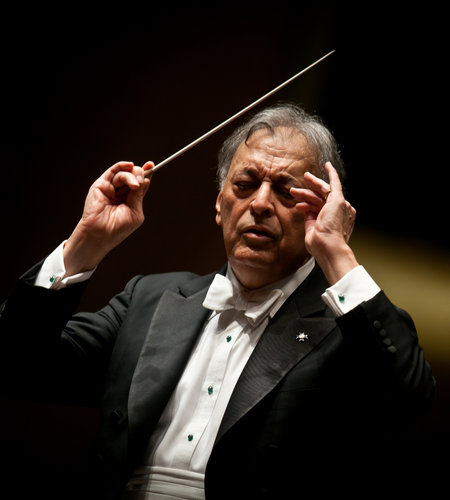 On April 29, 2021 the celebrated conductor, Honorary Member of the Russian Academy of Arts Zubin Mehta is marking his 85th anniversary.

Zubin Mehta is a world renowned master of major and deep symphonic works such as symphonies by Bruckner, Mahler, Richard Strauss. He is an active participant of various symbolic actions, concerts. In 1990, Meta conducted the first Three Tenors concert of Jose Carreras, Placido Domingo, Luciano Pavarotti in Rome timed to FIFA World Cup final. In 1994, Mehta performed the Mozart Requiem with members of the Sarajevo Symphony Orchestra and Chorus at the ruins of Sarajevo’s National Library destroyed in the Yugoslav Wars. In 1999, he conducted Mahler’s Symphony No.2 at the vicinity of Buchenwald concentration camp with the Bavarian State Orchestra and the Israel Philharmonic Orchestra. Mehta five times - in 1990, 1995, 1998, 2007 and 2015 was the conductor of the traditional New Year Concert in Vienna.

Zubin Mehta supports the discovery and promotion of musical talents worldwide. In collaboration with his brother Zarin he is a co-chairman of the Mehli Mehta Music Foundation in Bombay where more than 200 children are educated in Western classical music. The Buchmann-Mehta School of Music in Tel Aviv develops young talents in Israel and is closely related with the Israel Philharmonic
Orchestra, as well as the new project of teaching young Arab Israelis in the cities of Shwaram and Nazareth with local teachers and members of the Israel Philharmonic Orchestra.

The President of the Russian Academy of Arts Zurab Tsereteli, its Presidium and staff have congratulated Zubin Mehta on his 85th anniversary. The Letter of Greetings, in particular, runs:
“You are one of the most eminent conductors in the world. Continuing the traditions of your father - violinist and the founder of the Bombay Symphony Orchestra, you have been at the controls of almost all the leading orchestras in the world, including the Vienna and Berlin Philharmonic Orchestras, Montreal Symphony Orchestra, New Your Philharmonic Orchestra. You have been elected the Israel Philharmonic Orchestra’s music director for life, for eight years were Music Director of the Bavarian State Opera, conducted in Metropolitan Opera (New York), Vienna State Opera, Royal Opera House Covent Garden, La Scala (Milan), Opera Theaters in Chicago and Florence.
You are a man of the world, a man of legend, holder of numerous prizes and state awards, Honorary Citizen of Florence and Tel Aviv. In 2011, you received a special distinction in getting a star on the Hollywood Boulevard. You make a great contribution to the promotion of musical talents worldwide. Of special significance is your active involvement in various symbolic actions-concerts having a wide public response. Your creative biography is rich in musical triumphs such as the production of Giacomo Puccini’s opera Turandot in collaboration with the Chinese film director Zhang Yimou. The Russian Academy of Arts wishes you further creative discoveries and achievements, to be always in perfect shape and amaze the audience with virtuoso perfection”.