THE CREATIVE MEETING WITH NATALIA MURADOVA: PANEL DISCUSSION AT THE RUSSIAN ACADEMY OF ARTS 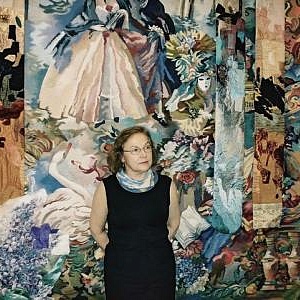 The Department of Decorative and Applied Arts of the Russian Academy of Arts invites you to attend the panel discussion “The Creative Meeting with Natalia Muradova” that will take place in the White Hall of the Russian Academy of Arts (21 Prechistenka street, Moscow) on October 18, 2021 at 13.00 and includes the display of the artist’s new works, as well as presentation of her book “Rags of Torn Time and Picturesque Patches of Feelings. The Dialogue That Is Half a Century Long. Fragments of an Unfinished Book”.

“What can an artist – a person who by definition is emotional, in many ways arranged differently, as a rule not disciplined – write about? He writes about his work, dreams of youth, which turned out to be more than reality; about what has happened, has been experienced and embodied in works. About constant dissatisfaction with the work done and the unexpected discovery, that the curtain is about to fall and there is no time to complete the plans. The book has been initially conceived as a collection of essays about the art of textiles to which I have devoted, as I can say now, my whole life, but not as a textbook or a kind of manual. Here, there are no recipes for dyeing fabrics, descriptions of looms for weaving  and frames for painting … I have never been engaged in teaching though I have a lot to say and to share. Usually I tell everybody and nobody, simply like into the air, let the one who wants hear, let the one who can take what he needs”.

The People’s Artist of Russia, Academician of the Russian Academy of Arts Natalia Muradova is a famous Moscow artist and distinguished leader of contemporary monumental and decorative art.  She started her career in the 1970s when the decorative and applied art was introduced into the architecture of public buildings and became dominant in the interior design.

The artist’s cooperation with architects provided a possibility to create decorative and monumental forms, tapestries, 3-D textile compositions. The problem of the synthesis of arts and architecture resulted from the requirements of the time. In those years, working in the system of factories of the Moscow Department of the    USSR Artists’ Union Muradova produced tens of theatrical curtains  and spatial compositions for public buildings, more than thousands of drawings for industrial enterprises. The diversity of interiors allowed the artist to work in various types and genres of art, as well as demonstrate the brilliant proficiency in many techniques.

The new, in terms of significance and mastery, creative period started since 1989. Muradova received commissions for the interior design of major state public buildings such as the Foreign Ministry and the State Tretyakov Gallery. The project of the State Tretyakov Gallery renovation included a complex design for the entire interior in which Muradova’s tapestries entitled “Three Centuries of Russian Culture” were one of the important integral parts.

In 1994-1999, the artist took part in the grandiose in importance and scope project  for the reconstruction of the Kremlin Residence of the President, within its  framework  two unique monumental tapestries were created by Muradova for the Security Council Hall, in particular, the panel for the anteroom and the curtain for the theater. For the implementation of this project lasting for five years of hard work Natalia Muradova was awarded the special Medal.

In 1999, they started working at the interior design of the Supreme Court of Russia. Muradova has been actively involved in the project since its early stages, produced eleven tapestries and big panels in author’s technique, created artistic decoration of the Assembly hall with gold embroidery, wall and ceiling paintings, sketches for the bronze, wooden and textile details, as well as a unique tapestry “Time” occupying the whole wall and space of the library of the Supreme Court of Russia and impressive and symbolic tapestry “Balance”. The works of Natalia Muradova have been highly appreciated by the Russian President Vladimir Putin during his visit to the new building of the Supreme Court on June 22, 2006.

Natalia Muradova is a holder of numerous honors and awards. For many years she has combined her creative work with public activity. The artist is an active  participant in the world art process. Her works have been regularly exhibited in Russia and worldwide, they are in major museum collections in Russia and many other countries, as well as in a great number of private collections.