EXHIBITION OF WORKS BY RUSSIAN ARTISTS IN THE GABONESE REPUBLIC 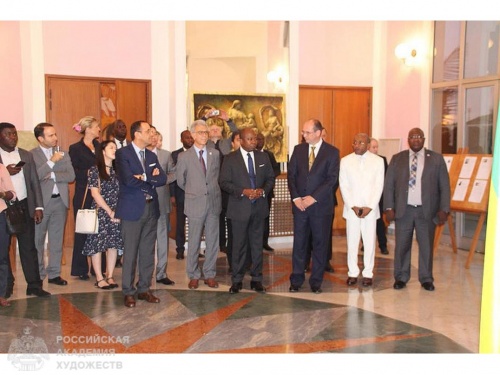 On March 9, 2018 on the initiative of the Russian Academy of Arts in the Russian Embassy in Libreville, the capital of the Gabonese Republic there was an official ceremony for the opening of the exhibition of works by Russian artists where seven canvases were presented as a gift to Gabon. The Act of the official gift was signed by the Minister of Culture of Gabon Mr. Billi Bi Nze and the Russian Ambassador to Gabon Dmitry Kurakov.

The exhibition is being held under the auspices of the Ministry of Culture of Gabon, the Russian Academy of Arts, the Russian Embassy in Gabon and the Regional UNESCO Office for Central Africa and will be on display in the National Museum of Gabon from March 10-12, 2018.