MAJOR RETROSPECTIVE OF WORKS BY THE PEOPLE’S ARTIST OF RUSSIA VALENTIN SIDOROV: IN HONOR OF THE 90th ANNIVERSARY OF THE MASTER 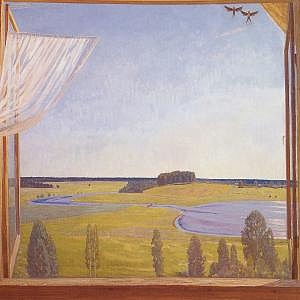 The recognized master of landscape painting Valentin Sidorov belongs to the artists’ generation of the 1960s. Based on the deep knowledge of life his creative work is truly national, the artist has managed to create in the art of landscape his own image of Russia and through his “special colors” depicted the beauty and soul of Russian village.

Valentin Sidorov was born in the Tver Region. In 1948 he finished the Moscow Secondary Art School, in 1948-1952 studied at I. Repin St. Petersburg State  Institute of Painting, Sculpture and Architecture, in 1954 graduated from V. Surikov Moscow State Art Institute.

His talent has revealed itself not only in painting, but also in literature. Valentin Sidorov is an author of several books and numerous articles on problems of culture and art. The artist’s stories could be an interesting addition of words to his painting as they share the same mood dominating in his landscapes. His works are in collections of major museums in Russia and CIS countries, as well as international   museums and private collections.

The creative, teaching and public activity of Valentin Sidorov has been appreciated by high state and professional awards, these are the “Order For Services to Motherland” of the 4th and 3rd ranks; the Order of Honor, Honorary Mention of the President of the Russian Federation; the Gold, Silver and “Shuvalov” Medals of the Russian Academy of Arts; the Golden Pushkin Medal “For Significant Contribution to Culture and Art”,  Mickhail Sholokhov International Prize, Order of Francisk Skorina and others.