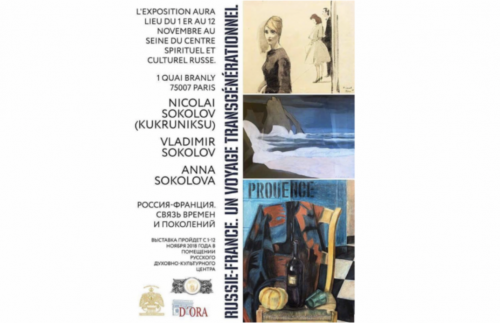 The Russian Orthodox Spiritual and Cultural Center in Paris (Quai Branly) hosts an exhibition of works by the Sokolov dynasty of artists.

The exhibition includes works by three generations of the dynasty starting with its founder Nickolai A. Sokolov (1903-2000) – Academician of the USSR Academy of Arts, member of the KUKRYNIKSY creative association of caricaturists.  On display are his works of 1954 executed during the guest tour of Comedie Francaise in the USSR. These are friendly cartoons on actors of the theater with their autographs, as well as sketches and watercolors of different periods.

His son Vladimir N. Sokolov presents his well-known works created in France – landscapes and still lives in the technique of oil pastel. The granddaughter of the dynasty’s founder Anna V. Sokolova, a graduate of V. Surikov Moscow Art Institute,  Member of the Moscow Union of Artists and the French Artists’ Union exhibits her paintings produced in various years.