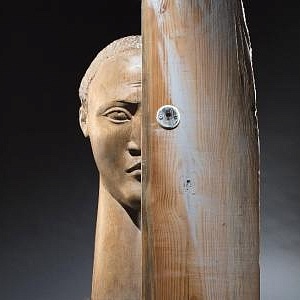 Victor Korneev is a sculptor-symbolist having his special vision and penetration into the core of phenomena. His works are an amalgamation of dramaturgy and philosophy. The artist’s art world is distinguished by the primacy of concepts without focus on the plot: In Search of the Light, Full Moon, Balance, Touch, Standing, Imagination, Reminiscence, Communication, Generosity.

Victor Korneev was born in 1958 in Tambov. He is a graduate of S. Stroganov Moscow State Academy for Arts and Industry, a participant of hundreds of Russian and international exhibitions. His works are in collections of the State Tretyakov Gallery, State Russian Museum, Moscow Museum of Modern Art and other art museums and galleries in Russia, Sweden Croatia, China, Cyprus. He lives in Moscow and Sweden. In his Moscow studio the artist creates his easel works, in Sweden the sculptor works in eternal materials, in the open air, in the natural environment, the northern majestic landscape.

Victor Korneev is inspired by the art of archaism, European sculpture of the 20th century, neo-classicism. Among his idols are the great metaphysician Rene Magritte, great sculptors Alberto Giacometti, Henry Moore. From them he has inherited the idea of the living and changing space witch centers on the psychology of the viewer.