PUNCTUM: EXHIBITION OF PHOTOGRAPHS BY THE HONORARY MEMBER OF THE RUSSIAN ACADEMY OF ARTS BORIS SYSOEV 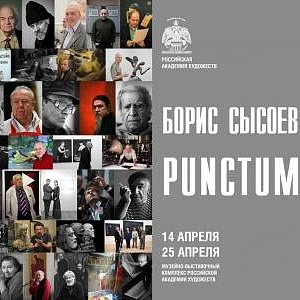 The exhibition’s concept is based on an important and somewhat mysterious PUNCTUM theory of the noted philosopher, literary critic and theorist of photography Roland Barthes. The idea is that photography is a “detail”, “injection” allowing to break the vicious circle of the usual ideas of the seen plot, scene, human that clearly resonates with another Barthes’s phrase about the “emotion as a starting point” which acts as a kind of a humanistic slogan of the exhibition.

On display are more than 50 photographs of celebrated artists, art historians and figures of art associated with the Russian Academy of Arts.  The group photographs from various events alternate here with individual photo portraits. A special section is dedicated to artists and art critics who passed away. These pictures became the relics of the past emphasizing the importance of Boris Sysoev’s private initiative to preserve the memory of these outstanding people. All the photographs exhibited have been presented to the Academy by Boris Sysoev as his contribution to the Academy’s memorial fund.

The exhibition is accompanied by Irina Daineko’s interview with the photographer. Boris Sysoev tells about his acquaintances and friendly relations with artists,   career, technological features of photography and its ability to preserve the memory of people, their life and culture. Thus, photography becomes part of private and professional biography while portrait photography is transformed into something more than a way of artistic vision. This existential relation to photography brings Sysoev closer to autobiographic “tones” of Roland Barthes’s research.

Boris Sysoev (b. 1950) is a professional photographer and journalist, Honorary Member of the Russian Academy of Arts, Member of the Moscow Union of Artists,

graduate of the Photojournalism Department of the Institute of Journalistic Skills under the USSR Union of Journalists.

At the beginning of his career he worked for the Tretyakov Gallery, then for a number of All-Union and All-Russian mass media, he is an author of photo materials for many newspapers and magazines including such well-known as “Ogonyok” and “Paris Match”. For 12 years he has been a photographer of the Easter Festival under the direction of Valery Gergiev.  Boris Sysoev  has been  involved in illustration of books and advertising publications, is an active participant of a lot of  major Moscow exhibition projects, group exhibitions in the Moscow Museum of Modern Art, Maly Manezh, Sergey Konenkov Museum-Studio, in the Archive of the Russian Academy of Sciences, exhibitions in St. Petersburg, Tbilisi and other cities.