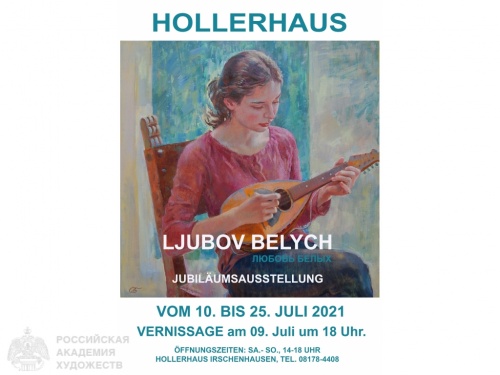 The Hollerhaus Gallery (Germany) presents a solo exhibition of the Corresponding Member of the Russian Academy of Arts Lyubov Belykh timed to the 60th jubilee of the artist. On display are works created by Lyubov Belykh for the last two years, as well as a retrospective of her paintings of the 1970s - 1980s.

The canvases by Lyubov Belykh are distinguished by extraordinary color saturation. "Like phoenix fr om the ashes" - these are the words which the Gallery owner Lia Schneider-Stockl used to express her joy about the opening of a new exhibition in Hollerhaus. And the fact, that it is the jubilee exhibition of Lyubov Belykh, that completes the long period connected with pandemic makes her especially happy. In her greeting speech Schneider-Stohl described the brilliant career of the talented artist who had "lost" her heart in the valley of the Isar river 30 years ago. In 1991 Lyubov Belykh came to Bavaria with a group of young artists from St. Petersburg at the invitation to arrange an exhibition in Wolfratshausen. A young man from the region was in charge of making a video about the visit of Russian artists. "Through the lens of his camera he looked with delight not only at the paintings but also at her" - said Scheneider-Stockl. Lyubov also liked the young man. "But at that time she had other plans. She had just finished her study in St. Petersburg and returned to Moscow wh ere she had a studio to start her career". But the young man from Germany continued to communicate with her, began to learn Russian and everything went as usual. This year they have celebrated the silver anniversary of the wedding.

Lyubov Belykh has been living in the Isar river valley for almost 30 years, but spends half a year in her studio in Moscow. She was born in the family of artists, painted her first picture at the age of three and when she was 13 she successfully entered the famous Moscow Secondary Art School. After her graduating from St. Petersburg Institute she came back to Moscow. Since 1988 Lyubov Belykh has been a member of the Artists' Union of Russia. She is a holder of many prizes and awards. Her brilliant achievements in portrait painting have been highly appreciated and she was elected a Corresponding Member of the Russian Academy of Arts. The solo exhibition in Germany offers an excellent selection of the artist's remarkable canvases including her early "Portrait of the Sister" and recent "The Girl with Mndolin", which can be seen on the poster for her jubilee exhibition.