VITOLD BYALYNITSKY-BIRULYA: EXHIBITION IN HONOR OF THE 150TH ANNIVERSARY OF THE ARTIST AT THE MUSEUM AND EXHIBITION COMPLEX OF THE RUSSIAN ACADEMY OF ARTS 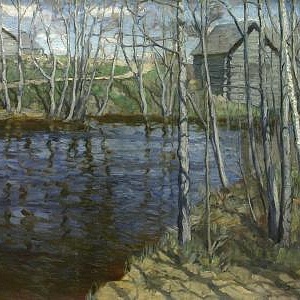 The exhibition is a rare opportunity to see more than 60 paintings of Vitold Byalynitsky-Birulya fr om the collection of the National Art Museum of Belarus, as well as six canvases from S. Gorshin Picture Gallery in Khimki. These are landscapes of various periods in his professional career including his lesser known theme cycles, memorial landscapes resulted from his trips to the Kola peninsular, canvases inspired by the artist's expeditions exploring wooden sculpture in the Arkhangelsk region, as well as the ones painted at his "Chaika" cottage and in Belarus in 1947.

The outstanding artist Vitold Byalynitsky-Birulya (1872-1957) has had a great talent of a painter of lyrical landscapes. He was born in Krynki, Mogilev Region, Belarus in 1872, studied painting at the Kiev Painting School under N.I. Murashko and in 1889-1896 at the Moscow College of Painting, Sculpture and Architecture. He was involved in the activity of the Association of Traveling Art Exhibitions, Moscow Association of Artists and Moscow Association of Art Connoisseurs. In 1908 Vitold Byalynitsky-Birulya was elected an Academician of the Imperial Academy of Arts. He lived and worked in Moscow and in his "Chaika" cottage on the shore of Lake Udomlya in Tver Region. In the 1920s-1930s the artist made a lot of creative trips across the country. In 1947 he came to his homeland wh ere he worked in the vicinity of Minsk. The artist gained wide recognition in the 1940s: he was awarded the title of the People's Artist of the Belarus Soviet Socialist Republic (BSSR) in 1944 and the People's Artist of the Russian Federation Republic in 1947.

The works by Vitold Byalynitsky-Birulya are in collections of many state museums and private galleries. The National Art Museum of Belarus (Minsk) contains more than 600 canvases of the artist covering all the periods of his creative work. They were obtained from his widow Elena Alexeyevna and private collectors by the Director of the State Art Museum of BSSR Elena V. Aladova.