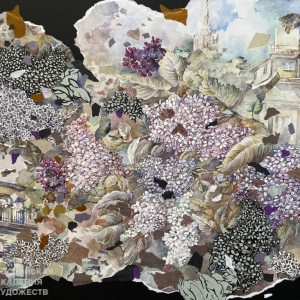 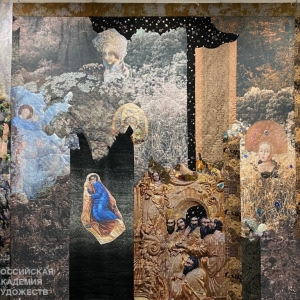 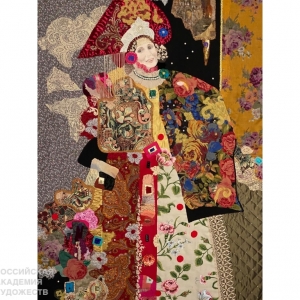 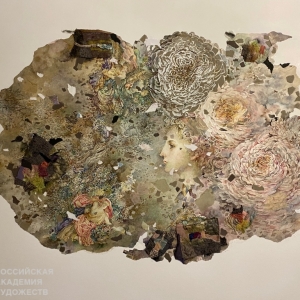 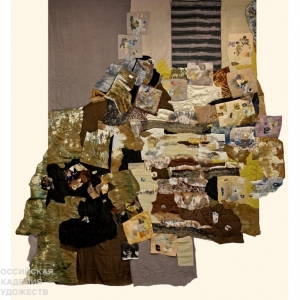 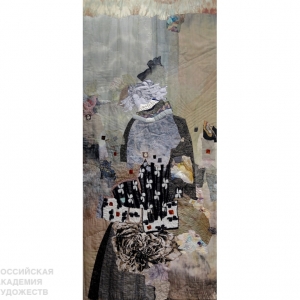 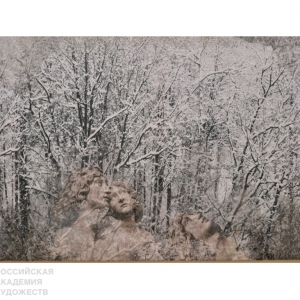 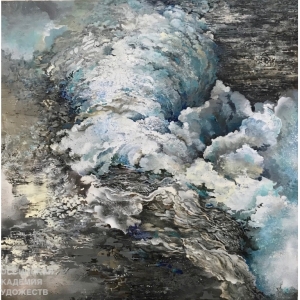 The Russian Academy of Arts presents an exhibition of the renowned master of textile, People’s Artist of Russia, Academician of the Russian Academy of Arts Natalia Muradova. The artist’s palette of techniques is limitless – classical weaving, painting, embroidery, 3-D sewing, canvas printing, imitation tapestry, also diverse is the range of materials – fabric scrapes, lace, glass beads, weaving fragments. The great semantic load is carried by texts – quotes fr om works of her favorite poets organically included in the flesh of the material, real objects used as signs of memory, symbols of events.

Having gone through different periods of searches and experiments in the general style flow of art, Muradova presents us her own individual style as an art phenomenon. This is a style with its original ideas and decorative figurative system, with special poetic and philosophical vision, with fantastic palette of techniques – from textile in all its beauty of picturesque and textual qualities to the use of author’s photography. In fact, each of Muradova’s works is a pictorial textile canvas, the picture of usually big dimensions (up to some meters)  with a complicated figurative and semantic structure.

The decorative gift of the artist has been revealed in her watercolors, sketches on cardboard, which are self-sufficient artworks. Muradova’s   bouquets and branches of lilac, roses, chrysanthemums are unique, they convey to the viewer a living presence of nature and are a subject of sincere admiration.

The work of Natalia Muradova is well-known in Russia and other countries.  She was born in Lodz  (Poland) on October 10, 1946. In 1971 she graduated from the Moscow Textile Institute, started her career in the 1960s when the Soviet art had to solve the tasks of creating an emotional and imaginative environment in the interiors of big public buildings.

In the 1970s the artist turned to hand-painted fabric.  In the period of her work in the system of art factories of the Moscow Union of Artists she produced dozens of theater curtains, tapestries and 3-D compositions for the interiors of public buildings, hundreds of drawings for art industry. Her creativity started moving   from planar painting to its transformation into 3-D textile panels.

The year of 1986 was the beginning of the new significant period when Muradova  in partnership with architects and art glass artists Timur Sazhin and Lidia Fomina was involved in the decoration of the interior space of such large and significant public buildings as the Ministry of Foreign Affairs and Tretyakov Gallery, for which in the period of its reconstruction she created the tapestries “Three Centuries of Russian Culture”, “Park. The 18th Century”, “The Noble Nest. 19th Century”, “The Poet’s Window. The 21st Century”.

In 1995, Natalia Muradova took part in the grandiose and responsible project of decorating the residence of the Russian President in the Moscow Kremlin. For the Security Council Hall she executed a unique “Emblem” tapestry in the technique of classical weaving with gold embroidery, as well as “The Radiance of Moscow” tapestry (40 sq. m), which was produced at the famous historical Manufactory in Aubusson (France). Her sketches and cartons are kept at the Manufactory museum along with drawings by Jean-Antoine Watteau, Francois Boucher, Jean Lurcat.

In 1999, Natalia Muradova was engaged in the project for artistic decoration of the new building of the Supreme Court of Russia successfully completed in 2007. The amount of the work performed was truly grandiose. For different halls Muradova made a number of large-scale works – textile panel, tapestries, paintings with the use of gold embroidery for the decoration of the stage of the Assembly Hall of 150 sq. meters. Her wall and ceiling paintings became a decorative dominant of the Library’s space wh ere the whole wall was decorated by her unique “Time” tapestry.

Muradova’s individual style has been fully revealed in dozens of her unique works created over the past 20 years and included in the collections of major museums of Russia, “Arts and Design” museum in New York, private collections. Her love for a word, talent for word mastery can be clearly seen in her autobiographic books “Petals” (2016),  “Rags of Torn Time and Picturesque Patches of Feelings” (2021).

Natalia Muradova has been a frequent participant of numerous national and international exhibitions including such major recent ones as the International Triennale of Modern Tapestry in Tsaritsyno (Russia) and International Textile Triennale in Lodz (Poland). “Happiness is to be able, to be recognized, invited… The wonderful sense of being in demand and support, the truth of what is happening” – said Natalia Muradova in one of her books about her creativity. The viewer feels and shares the artist’s aspiration to communicate on a note of emotional excitement.