THE BUST OF THE HOLY PRINCE ALEXANDER NEVSKY SCULPTED BY ZURAB TSERETELI WAS UNVEILED IN ST. PETERSBURG 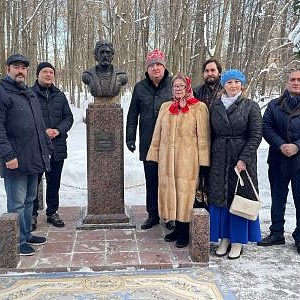 On December 10, 2021 on the foreground of the Iconographic Building of St. Petersburg Theological Academy (Embankment of Obvodnoy Canal, 17A) there was an unveiling of the bust of the Holy Prince Alexander Nevsky authored by the People’s Artist of Russia, President of the Russian Academy of Arts Zurab Tsereteli.

The ceremony was attended by the Rector of the Theological Academy Bishop of St. Petersburg Siluan, Vice-President of the Russian Academy of Arts and Executive Director of the Moscow Museum of Modern Art Vasily Tsereteli, Academicians Alexander Shilov and Sergy Shagulashvili.

The sculpture was presented by Zurab Tsereteli as a gift to St. Petersburg Theological Academy in honor of the 800th birth anniversary of the Holy Prince Alexander Nevsky. The historical theme is one of the top priorities in Zurab Tsereteli’s creative work. For many years, the master has been working at the series of sculptures dedicated to Russian statesmen, outstanding figures of science, arts and religious leaders. Many of these works can be seen in the Museum and Exhibition Complex of the Russian Academy of Arts in Moscow.