IN HONOR OF THE 75TH ANNIVERSARY OF THE EUROPEAN SCULPTOR, HONORARY MEMBER OF THE RUSSIAN ACADEMY OF ARTS MATEO MORNAR 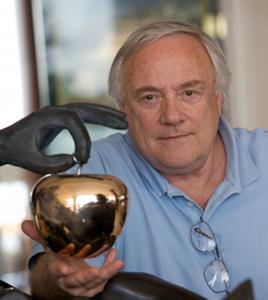 Mateo Mornar was born in Croatia in 1946. He moved to France together with his parents where he entered the Advanced School of Modern Art in Paris (ESAM). After graduation from the ESAM he worked in graphics and decorative arts for 20 years. By 1990, the artist had realized that he was eager to devote himself to sculpture. Passionate about his work Mornar was in constant search of the pure, true and beautiful. The female body has become an inexhaustible source of inspiration and one of the main themes of the sculptor. In the master’s works full of tenderness and love the female figure appears in all the splendor of grace.

In addition to the plastic sensual curves and female forms, the artist has also revealed himself in animal art. His bulls and rhinos are heavy, ponderous, severe and full of chthonic power. Among the favorite techniques of the artist are geometrized lines, cubic shapes and the collision of planes.

Mateo Mornar has created a number of monumental sculptural compositions for streets in Monaco. “The creators should bring diversity into the city environment. The art  should be in the street and not only in museums”, - says the master. Works of Mateo Mornar have been successfully exhibited throughout the world, including his solo show in the Museum and Exhibition Complex of the Russian Academy of Arts in Moscow in 2013.

The Presidium and President of the Russian Academy of Arts Zurab Tsereteli congratulated Mateo Mornar on his 75th anniversary. The Letter of Greetings, in particular, runs:

“You have a remarkable talent to see the beautiful in the surrounding world. Your peaceful attitude and desire to share creative emotions open people’s hearts in many countries of the world. Art collectors and admirers of your talent highly appreciate your creative searches in design, monumental sculpture and decorative arts. Your works adorn many streets and objects in Monaco radiating a great variety of human feelings.  On behalf of the Presidium of the Russian Academy of Arts I would like to wish good health, success in the discovery of young talents, inexhaustible inspiration, joy of creative achievements, happiness and prosperity”.