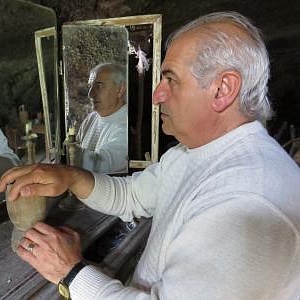 On July 28, 2022 the Armenian artist, Honorary Foreign Member of the Russian Academy of Arts is marking his 65th anniversary.

Jirair Martirosyan was born in Goris (Armenia). In 1981 he graduated from P. Terlemezyan Art College in Yerevan. The professional, private and creative life of the master has been closely connected with his native town which he never left for a long time. In various years Jirair Martirosyan has worked as a Director of the City House of Culture, Chief Artist and Director of Vagarsh Vagarshyan Goris State Drama Theater, taught at the School of Painting and since 2006 has been the Director of the Goris Picture Gallery.

But the most important thing is, that the nature and peculiar spirit of the ancient city have become for the artist an inexhaustible source of inspiration. Even the color of his canvases reflects the local color palette: grey stones, muted greenery, almost always cloudy sky, bright spots of houses. The artist says about his connection with his genius loci: “ I think, that it is not just about me. No wonder, that Goris has given so many talented people to the world. To live in this place and not to think of the beauty is impossible. You should stay here for some time and see it for yourself”.

The Presidium and President of the Russian Academy of Arts Zurab Tsereteli have congratulated Jirair Martirosyan on his 65th jubilee. The Letter of Greetings, in particular, runs:

“The distinguished representative of the Armenian school of painting, you have devoted many years of your creative activity to preservation of art traditions of Armenia. Largely, thanks to your authority as a cultural worker and public figure, the city of Goris has been elected a cultural capital of the Commonwealth of Independent States in 2018 and the national treasure of the people of Goris – the pearl of the Zangezur mountain country is being preserved. It is hard to overestimate your contribution to the formation and enrichment of the collection of the Goris Picture Gallery headed by you as a Director.

The Russian Academy of Arts highly appreciates your efforts in the promotion of the Russian-Armenian cultural dialogue, organization of exhibitions and other art projects with involvement of artists from Russia and Armenia. You successfully represent Armenian art in many countries of the world.

On behalf of the Presidium of the Russian Academy of Arts I would like to extend to you the warmest congratulations on your 65th jubilee and wish you good health, great creative success, positive world view and all the joys of life”.