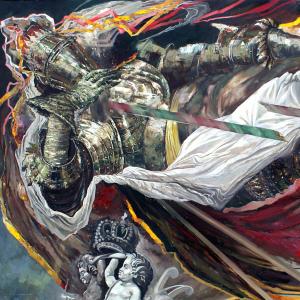 Petr Kozorezenko (b.1953) graduated from the Art Department of Sergey Gerasimov All-Russian State Institute of Cinematography. The artist is actively involved in creative, public and teaching activity. Since 1966 he has been a Professor of the Graphic Art Department of  S. Stroganov Moscow State Academy of Arts and Industry, he has initiated the establishment and heads the Academy of Arts “Stroganov Traditions”. Kozorezenko gives charitable master classes for schoolchildren in drawing, painting, composition, plastic anatomy, history and theory of fine arts.

The artist’s work inherits the traditions of Russian realistic art. He paints from nature, creates sketches for canvases, his artworks are distinguished by the aspiration for psychological features of his characters. The range of his creative endeavors includes easel painting, cityscapes, the theme of Russian village, portraits, canvases on historical topic, book illustrations. Petr Kozorezenko is a recognized master of Russian art of the turn of the 20th -21st centuries, a holder of many awards and prizes whose works are in museum collections in Russia and CIS countries, as well as in private collections in France, Japan, Great Britain, USA, Italy, Germany, Denmark, Australia, Austria, India, Spain, Luxembourg.