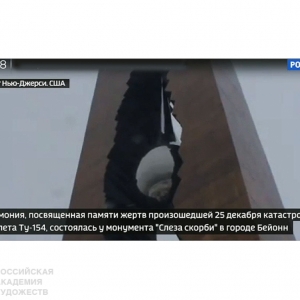 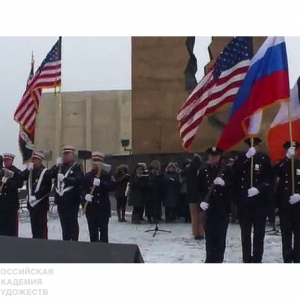 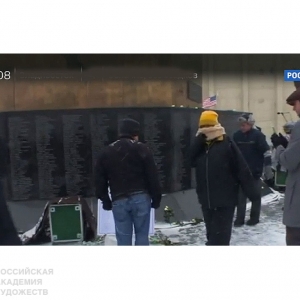 On January 6, 2018 at the Tear of Grief monument in Bayonne (New Jersey, U.S.A) there was a ceremony in memory of the artists of A.V. Alexandrov Ensemble of Singing and Dancing, all the passengers and crew members of TU-154 Airplane Crash on December 25, 2016.

The place for the ceremony has been chosen not by chance - the monument by Zurab Tsereteli has been presented as a gift to the American people in memory of victims of the terrorist acts on September 11, 2001. The first Russian-American ceremony commemorating the victims of TU-154 airplane crash was held at the monument in January, 2017 after the tragedy.

This year, the ceremony of laying wreaths at the foot of the Tear of Grief monument was attended by the Mayor of Bayonne, representative of the USA Christian diocese, member of the Senate of the State of Virginia Richard Black and Deputy Permanent Representative of the RF to the United Nations Petr Ilyichev, representatives of the international Schiller Institute, Police and Fire Department of New York city and New Jersey. The choir of the Schiller Institute sang the national anthem of Russia in the Russian language and the national anthem of the United States in English.

The Tear of Grief monument by the world renowned artist Zurab Tsereteli was unveiled in Bayonne (New Jersey) on September 11, 2006 on the fifth anniversary of the terrorist attacks on September 11.