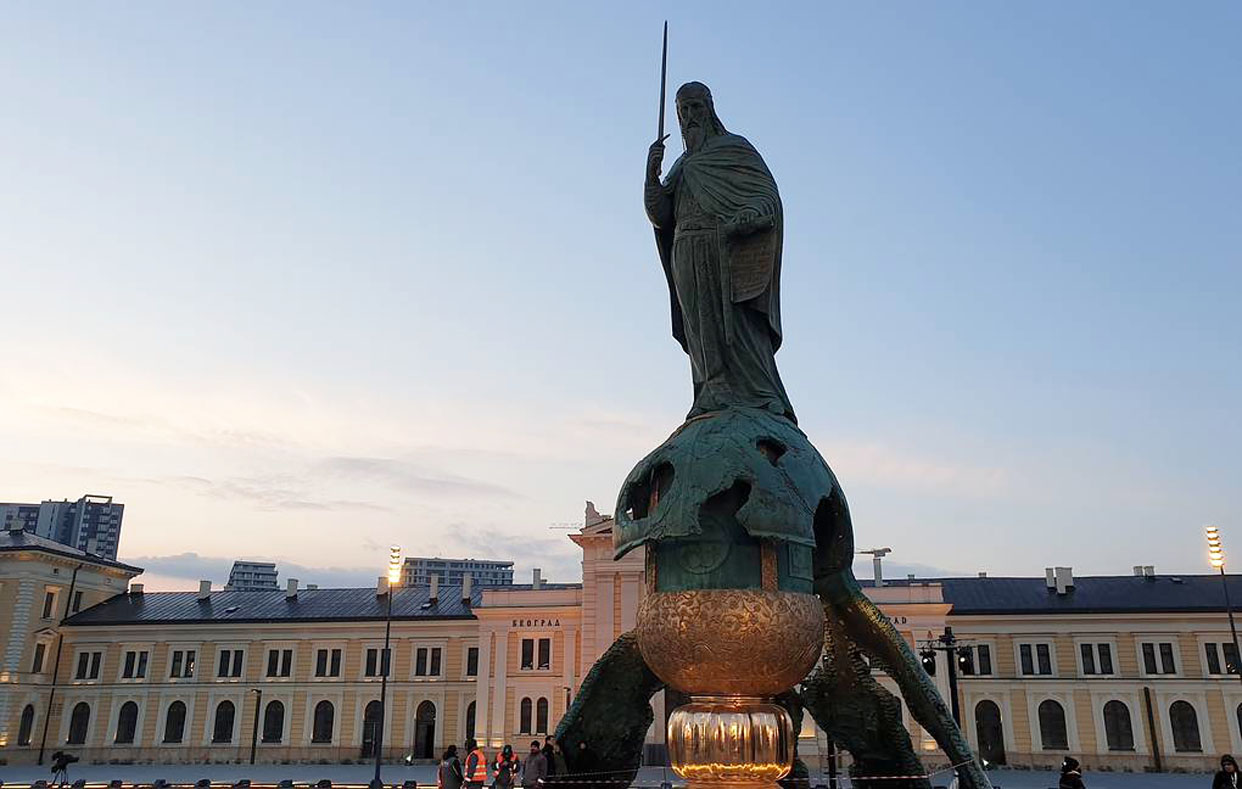 On January 27, 2021 in Belgrade there was unveiled a monument to the founder of the medieval Serbian state Stefan Nemanja created by the People's Artist of Russia, Academician of the Russian Academy of Arts Alexander Rukavishnikov.

The 23.5m tall monument has been erected in the renovated Savski Square in the downtown of the city near the old building of the Main Railway Station which is going to house the Serbian History Museum. The monument to Stefan Nemanja abounds in symbolism. Stefan Nemanja as a grand prince of Serbia stands on a broken Byzantine helmet symbolizing the connection of the Serbian culture with Byzantium. The pedestal is multi-layered, the helmet forms only the upper part. Under the helmet is the main part of pedestal which is made in the shape of a gilded episcopal scepter of his son Saint Sava (the first archbishop of the Serbian Orthodox Church since 1219), which is driven five meters into the ground and it can be seen through the transparent glass at the foot of the monument. Stefan Nemanja carries a raised sword in his right hand while in his left he holds a scroll from the Hilander Charter considered by Serbian historians as a "declaration of Serbian independence of the medieval ages". The truly grandiose monument weighs between 70 and 80 tons and it took them half a year to assemble the whole sculptural composition.

The decision to install the monument was made in 2017 - the year of the 800th anniversary of the proclamation of the Serbian medieval state as a kingdom. The winner of the international competition for the project was Russian sculptor Alexander Rukavishnikov.

The unveiling ceremony took place on the Day of St. Sava - Serbian state holiday and was attended by the President of Serbia Alexander Vuсic, Chairman of the Presidency of Bosnia and Herzegovina Milorad Dodik, Ambassador of Russia to Serbia Alexander Botsan-Kharchenko, Serbian ministers, politicians and public figures. The President of Serbia in his speech emphasized the significant role in the project of the Serbian Patriarch of Irinej who died of coronavirus late last year. Alexander Vucic thanked the author of the monument Alexander Rukavishnikov and appreciated him as "one of the great sculptors of today, whose sculptures are located worldwide, and now in Serbia".

Not far from the monument stands St. Sava Cathedral (son of Stefan Nemanja) which interior mosaic decoration was executed by a team of Russian artists headed by masters of the Russian Academy of Arts. Such joint projects prove the strength of many centuries' diverse ties between Russia and Serbia, as well as the spiritual unity of the two fraternal peoples.